In the recently published book , Light of the World: The Pope, The Church, and the Signs of the Times, author Peter Seewald asks the Holy Father that in the absence of a comprehensive international agreement from last year’s climate change summit in Copenhagen, Doesn’t this outcome necessarily confirm that mankind is altogether incapable of ever resolving a threat such as climate change in a collective effort?
The Holy Father responds: ” That is in fact a big problem.  Meanwhile, in view of the threatening catastrophe, there is the recognition everywhere that we must make moral decisions.  There is also a more or less a pronounced awareness of a global responsibility for it; that ethics must no longer refer merely to one’s own group or one’s own nation, but rather must keep the earth and all people in view.  The question is therefore: How can the great moral will, which everybody affirms and everyone invokes, become a personal decision?  For unless that happens, politics remains impotent.  Who, therefore can ensure that this general awareness also penetrates the personal sphere?  This can be done only by an authority that touches the conscience, that is close to the individual and does not merely call for eye-catching events. In that respect this is a challenge for the Church.  She not only has a major responsibility; she is, I would say, often the only hope.  For she is so close to peoples consciences that she can move them to particular acts of self-denial and can inculcate basic attitudes in souls.” 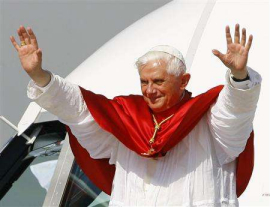 Pope arrives for visit to USA

This entry was posted in Eco-Justice, Issues and tagged climate. Bookmark the permalink.