Pope on Care for Creation 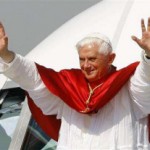 Pope Benedict continues to make the Care of Creation a central theme of his pontificate.

Pope Benedict XVI criticises the failure by world leaders to agree to a new climate change treaty in Copenhagen last month.  The link here will take you to the BBC News article with his remarks on the Copenhagen climate talks and the final Accord:  < news.bbc.co.uk/2/hi/europe/8452447.stm

In his August 26, 2009 address from his vacation home in Italy, Pope Benedict XVI offered, “support to the leaders of governments and international agencies who soon will meet at the United Nations to discuss the urgent issue of climate change.”

He said: “The economic and social costs of using up shared resources must be recognized with transparency and borne by those who incur them, and not by other peoples or future generations.”

He continued, “it is essential that the current model of global development be transformed through a greater, and shared, acceptance of responsibility for creation: this is demanded not only by environmental factors, but also by the scandal of hunger and human misery.”

This entry was posted in Issues. Bookmark the permalink.